Adrian has studied and performed a vast majority of the classical repetoire at a very young age. He has perfomed the principal roles in the full length ballets The Nutcracker, Paquita, Carmen, and Balanchine's Serenade as well as exerpts from the ballets Giselle, La Bayadere, Le Corsaire, and Swan Lake.

Adrian has been coached by some of the biggest names in the dance world including Edward Ellison, Gelsey Kirkland, Oleg Vinogradov, Heather Watts, Maina Geilgud, Jock Soto, and Irina Kolpakova. Adrian has also studied under the renowned mime and Drama coach Pilar Garcia who has coached stars such as David Bowie and Gelsey Kirkland. 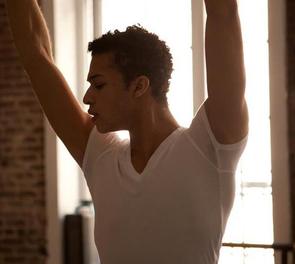 During his time studying at Vaganova Adrian received many opportunities to perform on the stage of Mariinsky. He was the first African American student to be afforded these opportunities, as well as the first to graduate from the highest class in 2015. Established in 1738, The Vaganova Academy is considered the official training program for the Mariinsky Ballet Theatre, formerly known as the Kirov Ballet. The establishment offered Mitchell a spot in the highest class of the school.  On the Stage of Mariinsky, Adrian danced a principal character role in the Ballet Laurencia, as well as a cavalier in the historic and original production of The Nutcracker. He also danced the role of Prince Sherri in Sleeping Beauty. In April 2015 Mitchell orginated the principal role in Max Sevagin's Elementarium on the new stage of the Mariinsky Theatre. He also worked with Russian Ballet stars Farouk Ruzhimatov, Yulia Makhalina and Nikolai Tsiskaridze on many roles in the Classical Repetoire including Swan Lake, Giselle, La Bayadere, and Scheherezade. Adrian began his serious ballet training quite late for a typical dancer - at the age of 12. That summer he attended Miami City Ballet's Summer Intensive on scholarship and recognized the level of work it would take to reach his dream. He dedicated the next 8 years to becoming an elite dancer. Adrian's talent has brought much attention by school directors, and he has been fortunate enough to receive scholarships from several prestigious ballet schools and summer programs to complete his training. In his early years these included NYC’s School of American Ballet Summer Program, Bolshoi Ballet Academy, Miami City Ballet.

Adrian on stage at Mariinsky

Adrian in front of the

The Vaganova Academy view from the street.

Adrian Blake Mitchell, graduate of the Vaganova Academy recently danced as a soloist in the Mikhailovsky Theatre. Trained primarily in New York City at Ellison Ballet, and in Los Angeles with Westside Ballet, Mitchell joined the 273rd graduating class at the Academy of Russian Ballet. During this year he performed principal roles on the stage of Mariinsky Theatre. he also had his debut as Prince Albrecht in the ballet Giselle. At only 21 years of age, he performed this iconic role at the Rimsky-Korsakov opera house under the direction of Oleg Vinogradov. Vinogradov is the artistic director emeritus of the Mariinsky Theatre and longtime mentor of Mitchell.